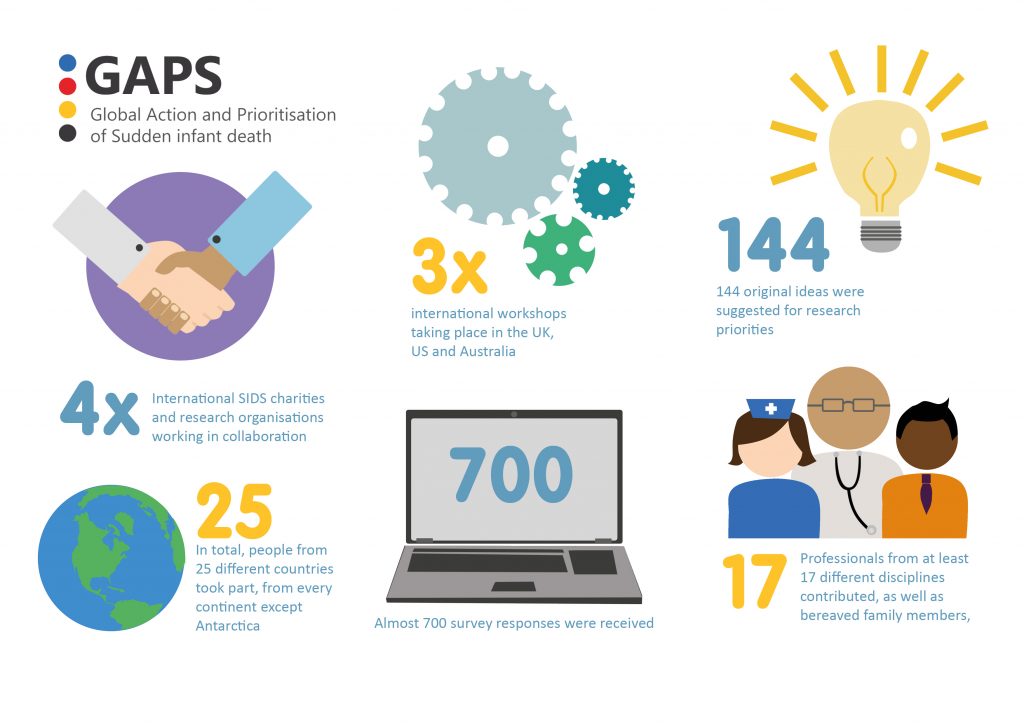 The paper, titled Research Priorities in Sudden Unexpected Infant Death: An International Consensus, highlights the charity’s pioneering ‘Global Action and Prioritisation of Sudden infant death (GAPS)’ project, run in collaboration with the International Society for the Prevention of Perinatal and Infant Death (ISPID), Red Nose (formerly SIDS and Kids) in Australia and the American SIDS Institute.

The project is the first of its kind to bring together both professionals and bereaved family members from 25 different countries to achieve consensus on the top ten SUDI research priorities. These priorities aim to focus the efforts of the SUDI research community and ultimately put an end to sudden unexpected deaths worldwide, by identifying the cause, which still eludes researchers.

In the UK alone, some 230 babies die suddenly and unexpectedly each year at a rate of 0.30 deaths per 1,000 live births. Since the launch of the ground-breaking ‘Back to Sleep’ campaign in England and Wales in 1991, the number of sudden infant deaths has fallen by more than 80%, and in 2016 ONS reported that figures had reached their lowest ever.

Francine Bates, Chief Executive of The Lullaby Trust and co-author of the paper says:  “The death of any baby is a tragedy for a family. That tragedy is compounded when a baby dies suddenly and unexpectedly and no cause is found. While sudden unexpected deaths in infancy are less common than they were 30 years ago, we must not be complacent. The GAPS research priorities now provide a clear direction for researchers around the world to make significant gains in tackling SUDI. The Lullaby Trust is proud of its achievements in identifying these ten global research priorities. As a world leader in tackling sudden unexpected infant deaths, we are committed to halving these deaths in the UK by the year 2020 and finding and eliminating the cause.”

The charity has developed a new research strategy in response to the GAPS findings, and as well as urging researchers to drive the priorities forward, is calling on donors and research funders to help them beat sudden infant death forever.

Ms Bates added: “While we understand the risks associated with sudden infant death, we do not know why apparently healthy babies and young children fail to rouse from sleep. Greater resources targeted at the problem are urgently needed. Bereaved parents generously stepped forward to work with researchers all over the world to identify these priorities and we now call on public and private donors to help us eradicate the pain of losing a baby suddenly and unexpectedly.”

The ten international research priorities for tackling SUDI are:

Dr Alexis Willett one of the lead authors of the paper said:  “When we initiated the study we hoped to bring together like minds. The response from both SUDI researchers and bereaved parents around the world has been incredible and there is clearly a huge appetite for working together to make a difference. The Lullaby Trust and the entire SUDI community now have a critical role to play in maintaining this momentum but will need support if they are to make significant headway.”

To learn more about the GAPS project, download our Target SUDI Together report.