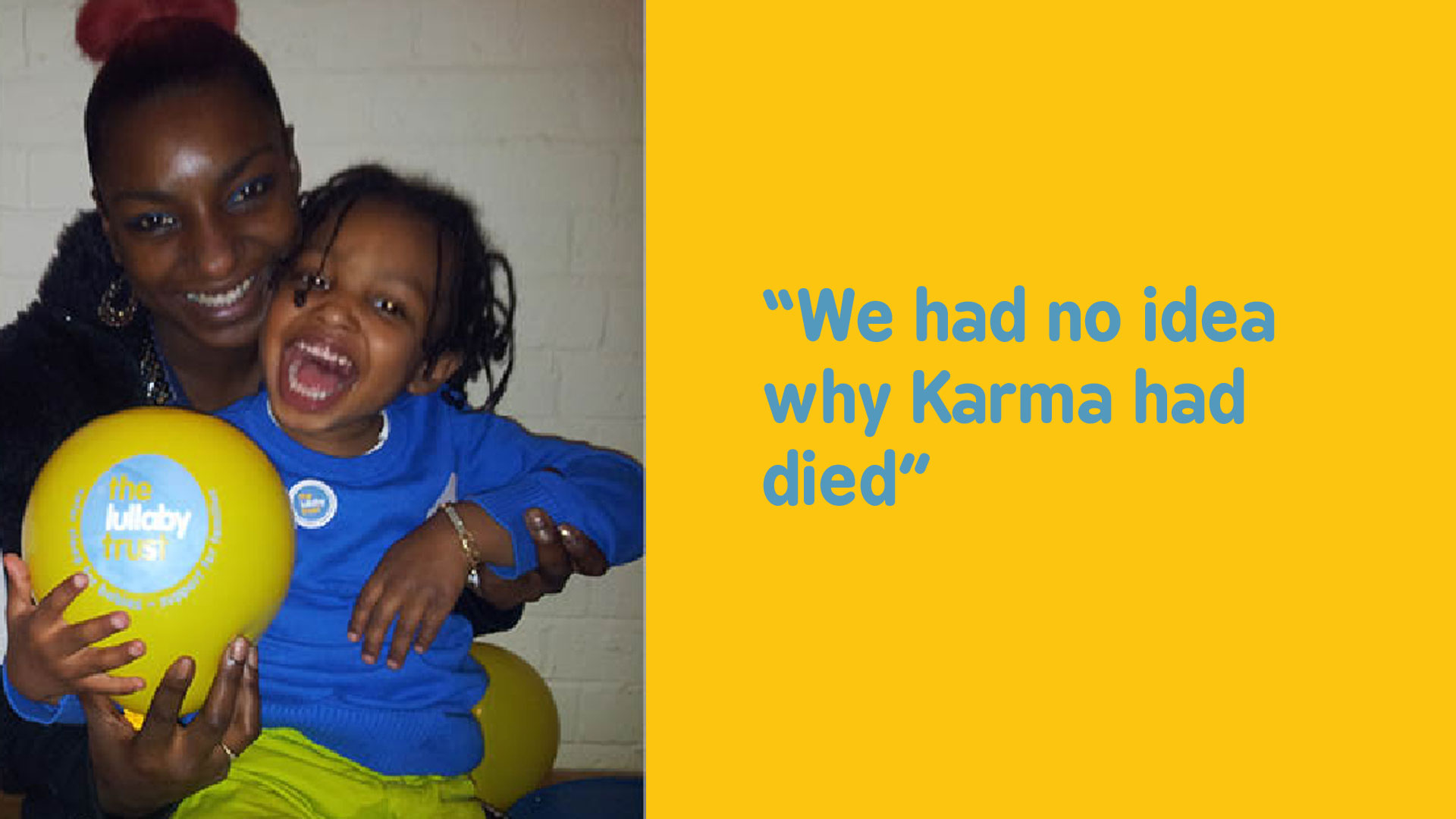 My name is Zoe and I am 24 years-old. On the 20th of September 2007 I gave birth to my first child at the age of 18, a beautiful girl called Karma. She was a healthy baby and within 24 hours my partner, Anthoney, and I were at home ready to begin our life as a family. We had both planned to have Karma and were really excited to become parents.

On the 7th of December I had arranged to go out so Anthoney and I left Karma with my sister, who was a great support to me as a young mum. We left around 12.30am and later returned at 6am to collect Karma. Still asleep we got her ready and called a cab to take us home. Karma woke shortly after we arrived home wanting her morning feed. My partner ate while I fed Karma then he winded her while I ate. We loved watching her smile; she was so bright and happy in the morning. We laughed as she made funny noises and eventually she dozed off.

At 8am we all went to bed, Karma slept in her own bed in the same room as us – we were all in the front room as I was in temporary housing at the time. However the house was in the best of conditions and was always clean and maintained.

At around 10am, only 2 hours after falling asleep, I woke up suddenly feeling anxious. I had no idea why but I quickly turned my head to look over to Karma’s bed and she was not in the exact position I left her in. Automatically I jumped up and screamed waking my partner. I picked Karma up and she felt warm but I could feel she was still. I kissed her and put my finger on her to see if she was breathing, I hoped I was being dramatic but I was right, she wasn’t breathing. My heart sank.

My partner was panicking and I knew I just had to stay focused. I had previously done first aid training for children and babies so tried to resuscitate her. I was so scared I was going to make a mistake or waste time so I told my partner to call 999. The ambulance came in what must have been minutes but felt like a life time. They rushed in, cut her top and began to try to resuscitate her. They asked me questions which I knew were necessary and just procedure but felt intrusive and as though I was being judged. It is the most terrifying thing, not being able to do anything and not knowing if Karma was going to live.

The paramedics took her to hospital and after only a short time the doctor came to tell us that nothing was working and maybe it was time to give up. Determined this was not going to happen to us, to our daughter, I begged him to continue. Eventually Karma began breathing but we were told it was mainly due to the numerous adrenaline shots she had been given and because she had been unconscious for so long there was a high risk of brain damage. I started to think of how my life was going to change if Karma did have brain damage but that I would be happy to have her no matter what.

The Children’s Acute Transport Service (CATS) arrived by helicopter to assist and fly Karma to Great Ormond Street Hospital, if she became stable as she would need intensive care immediately but unfortunately Karma could not maintain her own breathing and was reliant on a machine. This was the point at which my partner and I had to make the decision to let her go. I can remember just thinking somewhere out there was another mother in the same pain as me, praying and hoping her child can be saved, but I knew mine couldn’t and I felt selfish letting the CATS team stay there any longer when the could have the chance to help or save another family. We held her and said our goodbyes and she died.

In the numb days afterwards the police came to get statements and refer us to relevant organisations to help with the loss of Karma. This is when I first came across the Foundation for the Study of Infant Deaths (FSID), now the Lullaby Trust, although we had no idea at this point why Karma had died. After the autopsy it was heard that Karma was a clean, healthy baby and the cause of death was Sudden Infant Death Syndrome (SIDS). To me, I had lost my daughter and lost my identity as a mother and it was even worse knowing that her death could not be explained.

Within the year following Karma’s death I slowly began to grieve and I dealt with her death by going to college and working in a nursery. One day I felt down and called The Lullaby Trust where I spoke to Marcia and it was so helpful just to speak to someone who had no idea of my life or situation and could just listen. At times I wouldn’t even say much, I’d just think or cry. I only called twice but I felt that was all I needed as I had my mum and sister, but at times I felt as though I didn’t want to upset them and so being able to call The Lullaby Trust really helped.

A few years ago I decided I wanted to become more involved with those who had lost a child. I had been in contact with The Lullaby Trust and despite it being out of my comfort zone I decided to go along to one of their annual Family Days Out. After meeting everyone and other parents I knew I had to get involved. I had just started University and now had a two-year-old boy so was very busy, but I wanted to make a contribution. It was suggested I become a Befriender and after training I found it to be a rewarding involvement with the charity and was something I felt comfortable doing.

I hope to do more within the charity in the future but I am glad that I am able to support other families, especially young mothers, through such a difficult time. We will always love and miss our daughter Karma Nai, she was a lovely baby and we are lucky to have had her even for such a short time.