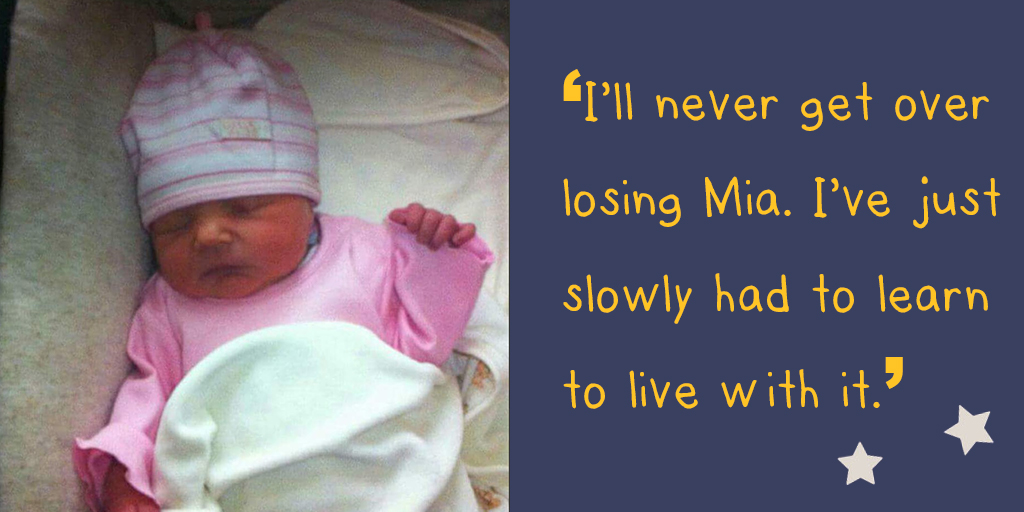 I had Mia at just over 37 weeks after a relatively easy birth. She was perfect and totally healthy. We came home and life was good—she fed well and was a really happy baby.

When she was two days old I put her to bed. She had fed a lot that day and night but nothing out of the ordinary. I can remember being so tired and needing sleep.

I woke up the next morning to see her looking different. The only way I can describe it was that she looked like a doll, and I instantly knew something was very, very wrong. I called an ambulance which only took a matter of minutes to come, but it felt like forever.

The paramedics picked her up, ran out the house and put her into the ambulance with the lights and sirens going.  We followed in the rapid response car behind and the journey was—and still is—a blur.

We were put in a room and made calls to family and close friends to let them know what was happening. A doctor came up to us and said, “I’m sorry, there is nothing more that we can do, she’s gone,” then instantly turned and walked away. In my heart I already knew she had gone, but it broke me to hear it said out loud and confirmed.

We went to see her and looking at her tiny body on that big hospital bed still wired up broke me once again. I desperately tried begging them to try again, to do more, to do anything, but there was simply nothing they could do.

We were then shown to a little room off the children’s ward where Mia was bought to us in a Moses basket and dressed in clothes that were not her own.

At this point, due to her dying at home, we were told that the police had to talk to us. I went into meltdown, we had done nothing wrong and we had never had any dealings with the police in our entire lives. I can recall looking down and seeing that the clothes I had thrown on in a panic that morning had a stain on them where she was sick on me the night before, and instantly I thought the police would think I was a bad parent.

The police arrived and we were spoken to whilst I held her in my arms. They were so kind. I knew they had a job to do and they handled it with total professionalism and respect for her and for us. For that I will be eternally grateful.

We had time with her as a family. However as the minutes and hours passed, her little lips getting a blue tinge. I didn’t like it so I adjusted her blanket so it sat below her little nose, the rest of her looking perfect just like she was asleep.

I could not face telling the other children. They were due to meet her the next day for the first time. They were so young and were still babies themselves; how on earth could I tell them when I couldn’t process my own feelings and emotions?

I threw myself into organising her funeral for the next week. Every morning I woke up strangely at exactly the same time I had woken and found her, and for a split second I would forget and then it would hit me so hard, remembering and reliving everything all over again.

When she came back from the post mortem we saw her in the chapel of rest. She looked perfect. She had a little bit of make up on so the blue tinge that had haunted me was gone, and she was dressed in an outfit I had chosen.

The next few days I just needed to keep busy and plan the perfect funeral, the last and only thing I could do for her. I chose her the prettiest outfit, I wrote about her, I chose the music, I gave her my favourite teddy and some photos and surrounded by friends and family, we gave her the perfect day.

As the days went on, I felt resentful of people going about their daily lives.  How on earth could they whilst I felt like my life stopped the day she died? I wasn’t coping too well. I was numb and I was broken.

I can still recall smiling at something silly on the television for the first time weeks after and feeling the biggest pang of guilt, questioning how on earth I can smile, and how will I smile ever again?

But as each day, each week, each month passed slowly things became slightly less painful.

I then began raising awareness and money for The Lullaby Trust, needing to draw something positive from losing Mia, and I raised over £9000.

I’ll never get over losing Mia. I’ve just slowly had to learn to live with it.