Back in 2013 I had an idea. I had been working with The Lullaby Trust for a couple of years and observed that research into sudden unexpected death in infancy (SUDI) seemed in some ways rather piecemeal and uncoordinated: researchers often working within very small teams, with tiny budgets, and thousands of miles apart.

Having experience of how researchers effectively operate in other fields, I felt that SUDI research might benefit from a focused plan that all researchers could get behind. Such a plan would identify specific priorities likely to have the most impact on bringing down SUDI rates and subsequently inform lines of research and funding priorities.

The first step: approval and funding

I realised that The Lullaby Trust was in a perfect position to bring the SUDI community together to come to a consensus on the way forward in research. Francine, The Lullaby Trust’s Chief Executive, jumped on the idea and asked me to prepare a project proposal for consideration by the charity’s Scientific Committee. I was delighted that they approved the proposal and agreed to dedicate funding.

The response from the international community

The charity’s staff did a wonderful job of designing the finer details of, what was to be called, the Global Action and Prioritisation of Sudden infant death (GAPS) project and securing the enthusiasm and partnership of international colleagues. It wasn’t long before online surveys were being distributed far and wide around the world. 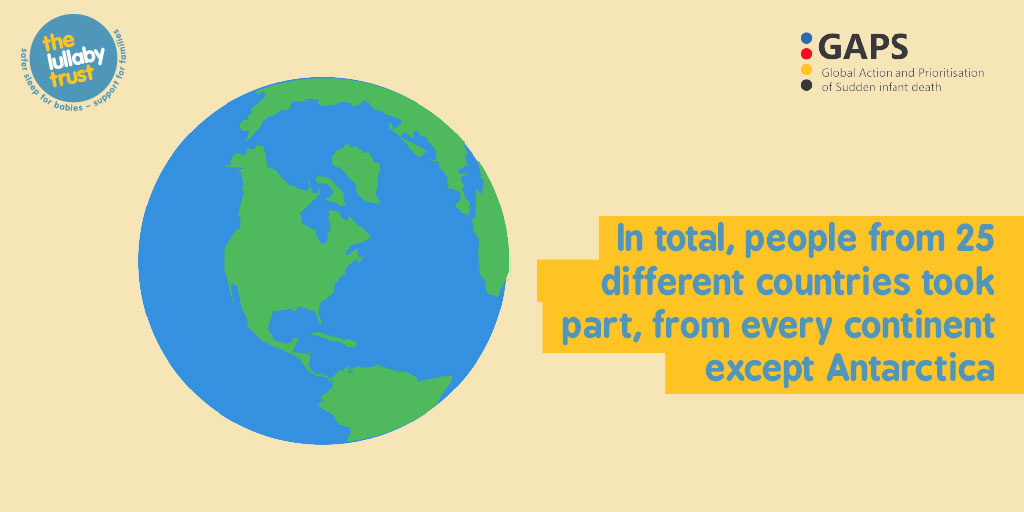 I was thrilled at the response and participation of the international SUDI research community. People from 25 countries took part, representing over 17 different professional disciplines and hundreds of bereaved parents; those who know just how vital research into SUDI is. Mid-way through the project I had a baby, which also brought the issue even closer to home.

Being a facilitator at the London workshop  gave me a fantastic insight into the perspectives of the different stakeholders, from scientists and health professionals to bereaved parents, who kindly gave up their time to contribute their thoughts. I was impressed by their passion and wisdom and gratified that they were determined to work through any differences of opinion to come to a collective agreement on research priorities. They respected the importance of the bigger picture over any personal interests. (In my work this doesn’t always happen, with too many egos often battling to get their pet projects chosen.) 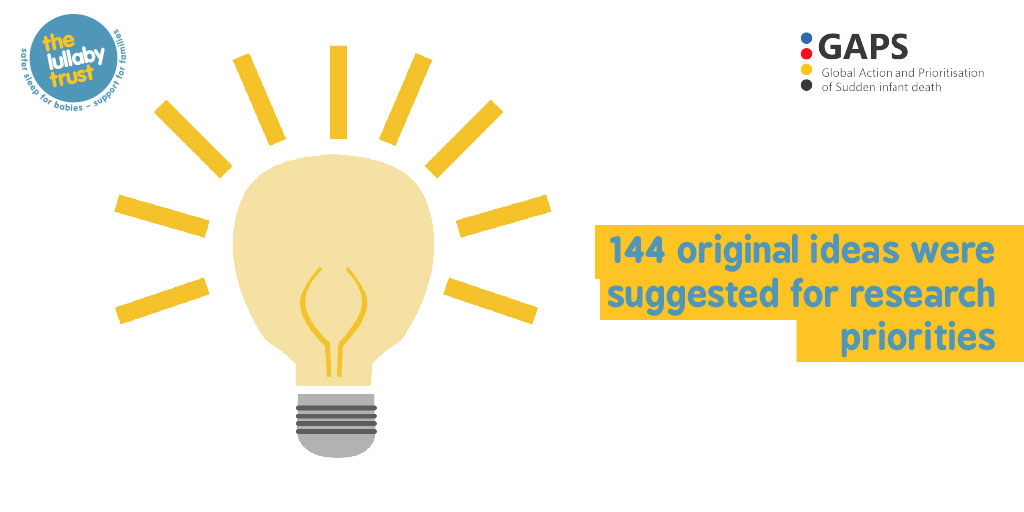 Before long we had consensus lists from the workshops in the UK, US and Australia, and aggregate scoring of the three lists led us to the top 10 international research priorities for SUDI. It was very satisfying to write up the findings of the project as it felt very much like we were on the home straight.

It was important and a real honour that the GAPS project was published in Pediatrics (a leading medical journal with global readership) in July this year. There’s no value in a project of this type unless it gets published and reaches the wider SUDI community, in order for people to appreciate the vision for research and to encourage adoption of the priorities. 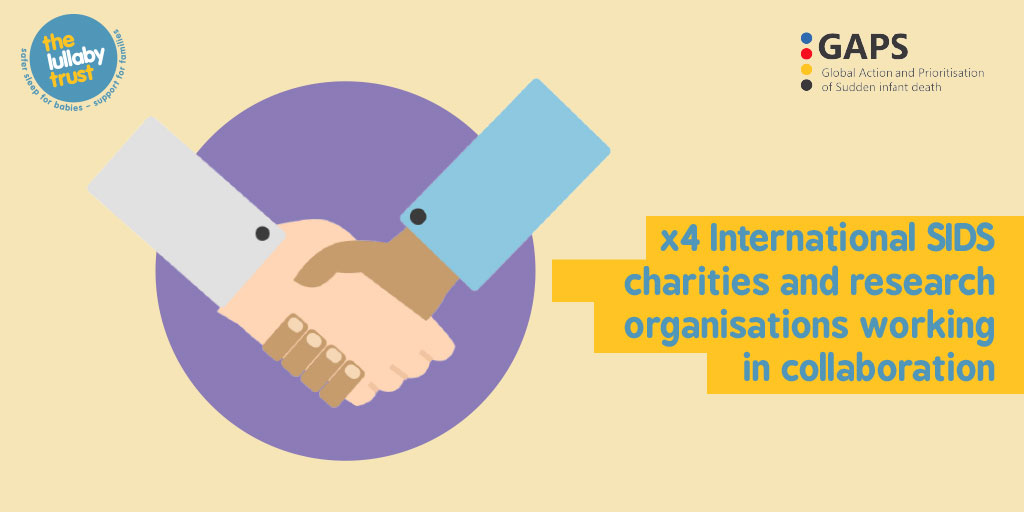 Alongside this, I drafted the lay report for The Lullaby Trust, which is a more accessible summary of the project for a broader range of stakeholders. This report emphasises the importance of the research priorities and what is now needed to support their roll out.

How GAPS will impact SUDI research

Both the response of the SUDI community and the end result of the GAPS project have been amazing; an international project of this type has not been tried before and we showed that it is possible and worthwhile, even on a small budget.

Just as any parent hopes their child will flourish, my hope for the next steps of the GAPS project (my work ‘baby’) is that the research priorities become widely cited and applied around the world. This is ultimately what matters if a significant dent is to be made into SUDI rates. 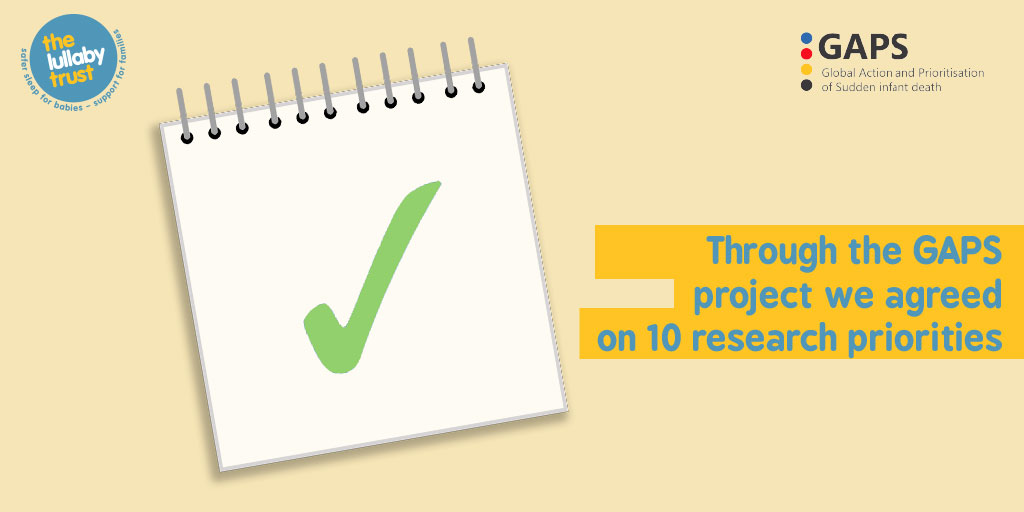 I hope that researchers use the priorities to frame their ideas, that funders use them in their decision-making regarding which grants to approve, and that policy-makers use them to understand the current status and future vision for SUDI in order that their decisions are meaningful and impactful.

The Lullaby Trust has itself designed a new research strategy in line with the priorities identified in the GAPS project, which is set to influence SUDI research in the UK, if not further afield. In addition, we hear other organisations around the world may do something similar.

The impact of The Lullaby Trust

The Lullaby Trust was fantastically supportive during the GAPS Project, even during times when co-ordinating multiple stakeholders with different viewpoints in numerous locations was proving challenging, and I’m grateful for their unwavering faith in my idea.

I’m also thankful that The Lullaby Trust took the time to listen to me, since I am not a SUDI expert. I like to think it was the very fact that I’m not an expert, but merely an external observer, that led me to the objective insight that consensus was greatly needed. I have seen, and been involved with, similar activities in other areas of health and felt this approach would really benefit SUDI research.

The Lullaby Trust is an inspirational organisation, serving a vital function in a world where other health issues often have a louder voice and capture most public attention. Someone is needed to cut through and speak out about rarer conditions, like SUDI, continuously raising awareness, challenging misconceptions, promoting education, supporting those affected and campaigning for change. The Lullaby Trust plays that role admirably. 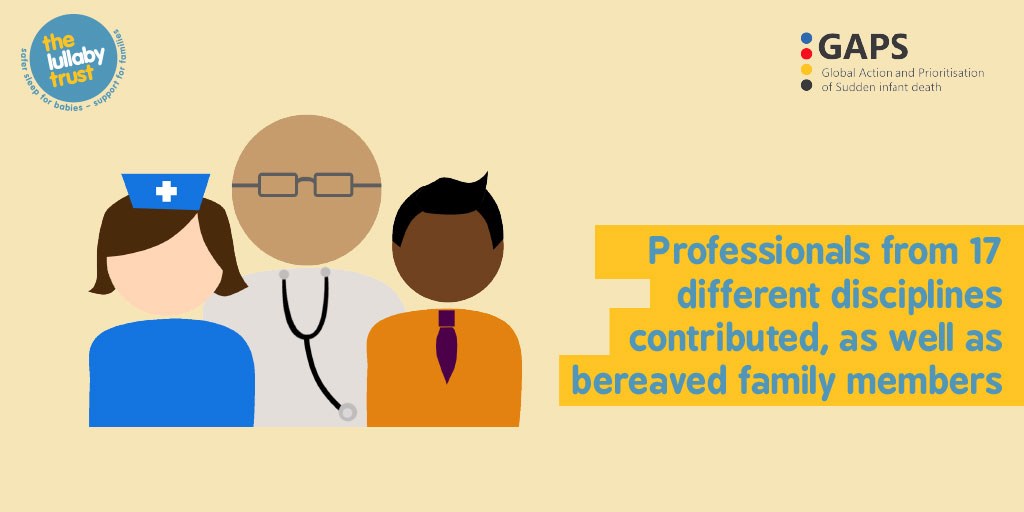 It is the same courage of conviction that the charity displays every day that prompted it to take the bold and innovative decision to lead the GAPS project. And taking the risk has paid off – an important and influential set of priorities that could change the direction of SUDI research is now out in the world for all to see and grasp by the horns.

With such a targeted approach to research, the SUDI rates will in time come down and, by taking a chance on a simple idea, The Lullaby Trust will have provided the catalyst for that to happen and in the process saved countless babies’ lives.

Alexis is Director of Punch Consulting, an independent consultancy with expertise in health and science strategy, policy research, stakeholder engagement and communications. She conceived the GAPS project.