Anna recently completed the Local Landmarks Challenge, after the London Landmarks Half Marathon (LLHM) was postponed. Anna ran in memory of her son, Sennen and raised over £1,400 in his memory. Anna says:

“I took up running when I was seeking ways to try and live alongside my grief after our son Sennen died. I am not normally a sporty person, but I found running helped as it offered me some headspace, and I found it lifted my spirits. Observing details in our natural world helped bring me into the present and see that there is still beauty around me, despite living with immense sadness.

I chose to run the London Landmarks Half Marathon after reading about it in The Lullaby Trust newsletter. It coincided with the 3rd anniversary of Sennen’s death and what would have been his 4th birthday. I wanted to do something special in his memory at a particularly difficult time of year and this event gave me something positive to focus on.

I was a bit worried when the LLHM was postponed due to coronavirus that I would not be able to run the half marathon distance alone (due to coronavirus restrictions) without being spurred on by the crowds and atmosphere. However, the day I chose was beautifully sunny and I was surprised how much I enjoyed doing it. I chose to run alone in long loops from my home to a beautiful local meadow in Exeter. Knowing I was doing it in honour of Sennen’s life really helped my motivation. Running past my driveway meant my husband and 2 other sons cheered me along and the jelly babies and smiling faces they offered helped! 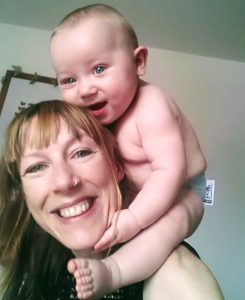 The Lullaby Trust has been immensely helpful to us as a family, offering compassionate support, befriending and family days when I don’t feel so alone in my grief. We have hugely benefited from their Care of the Next Infant scheme too, when we were very fortunate to have another baby after Sennen died. This offered extra reassurance when we needed it. I wanted to fundraise for The Lullaby Trust as their work is so important in saving babies’ lives and supporting families affected.

I definitely hope to participate in the LLHM once it can be rearranged and continue to raise funds for The Lullaby Trust in Sennen’s memory.”