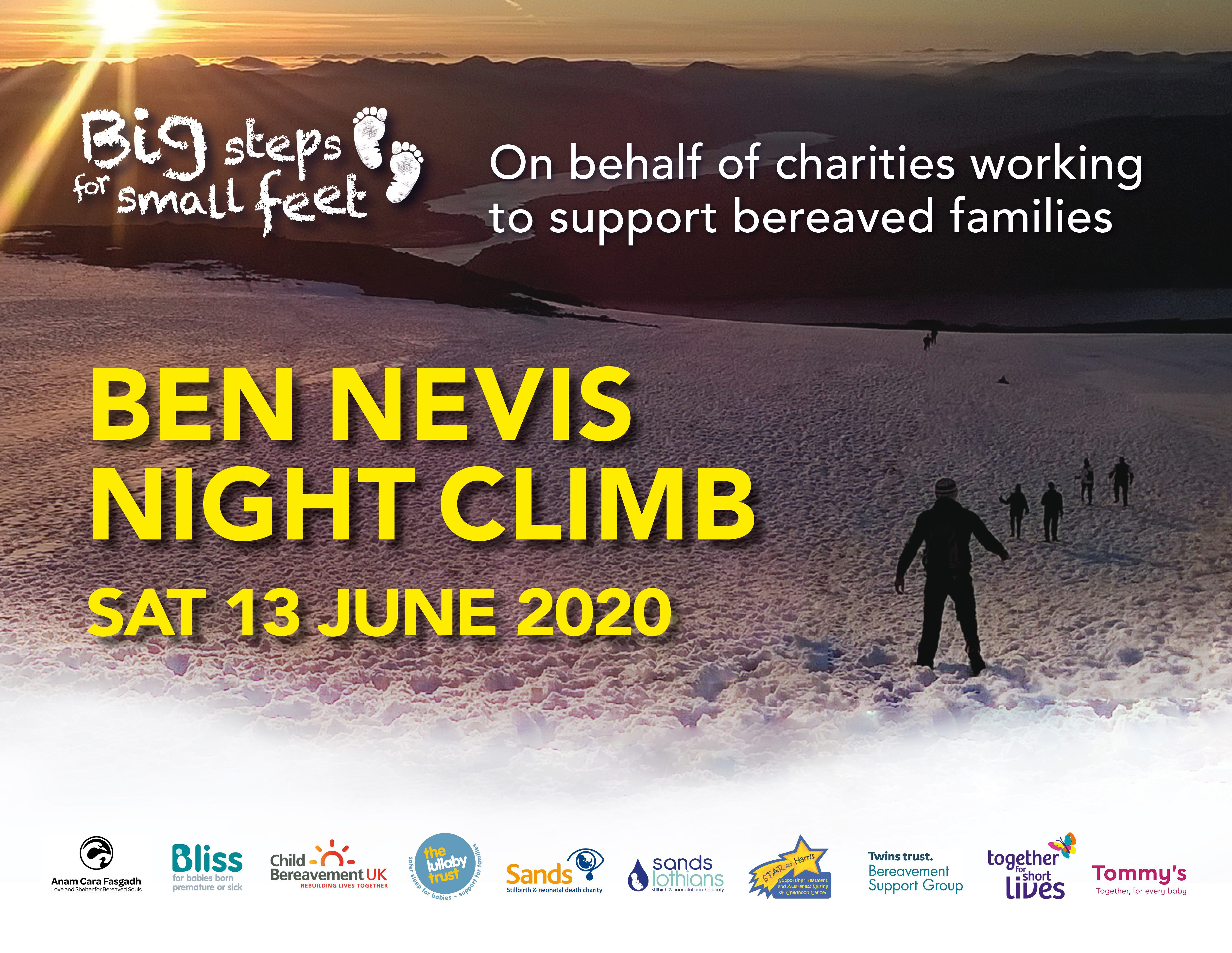 Big Steps For Small Feet has been organised by Michael McGuire from Fort William in memory of his son Kyle, raising funds for ten charities supporting anyone affected by the death of a child, including his own, Anam Cara Fasgadh, which provides respite accommodation for families.

As the highest point in Scotland and the British Isles, Ben Nevis stands at the lofty height of 1343m (roughly 4000ft). Reaching the summit of this mountain at night will be an unforgettable challenge, with the way lit only by the moon and torches.

The hike will set off up Ben Nevis in the evening on Saturday 13 June 2020, just after sunset, and should be at the summit to experience the sunrise. As the walkers descend, they will see the spectacular landscapes open up before them as the day grows lighter before celebrating the achievement with a team breakfast.

Michael McGuire said: “Our journey began in May 2009 when our only son Kyle was born asleep at 32 weeks.  It literally shattered our world.  Rachel and I were a newly married couple living in Glasgow with no family and I had to return to work just 3 days after burying our son. The day we laid him to rest at Fort William we saw rainbow after rainbow in the sky.

“We started raising awareness almost immediately for Kyle. First through a night for Sands then, as the years passed, six marathons for children’s charities close to our hearts. Over the coming years, rainbows played a huge part, giving us hope and belief we would be OK. In 2010 our daughter Amelie arrived, our precious rainbow baby, and whilst she has been the hope that saved us, we have always missed our son.

“In June this year I was up Ben Nevis at 1am with a friend as weather was perfect. It gave me a fire to try to use the beauty on our doorstep for the greater good. I never expected the reaction and now we find ourselves with ten amazing charities together working with the same goal of helping other families. We owe it to Kyle to try and make a difference for others, to know we can smile and tell his little sister we never gave up.”

Those taking part in the event will be able to choose to support one of the following charities: Anam Cara Fasgadh, Bliss, Child Bereavement UK, Sands (Stillbirth and neonatal death charity), Sands Lothians, Star for Harris, The Lullaby Trust, Together for Short Lives, Tommy’s and Twins Trust.